Common Home
A4 sheets of recycled paper and staples
Sintra, 2020

The piece above is highly fragile and tells us about the fragility of our home.

It invites us to acknowledge that the place where we live needs to be taken care of. Like a garden, our home must be cared for, treated, pruned if necessary, with all dignity, respect and attention.

NOT FOR SALE is an art exhibition, presented in digital format due to the current pandemic crisis. The exhibition is part of the project Juntos pela Mudança II [Together for Change], as a sensory complement to the message on caring for the Common Home.

This piece by artist Rita RA s based on some key ideas already present in her work, such as fragility, community, care and action.

It plasticly and digitally explores materials such as paper, glass and metal, and matters such as soil, stone and water, inviting us to viscerally recognise everything around us, in an inner proposal and dialogue for external action and care.

1. Common and delicate material
2. Requires care to be preserved with integrity
3. Easily gets dirt, folds and destroys itself

Until the end of the 20th century, it was usual to see, in the cities of Lisbon and Porto, white cards or sheets pasted on windows to show that this house was available for rental. It still can be seen in smaller cities and towns across the country. It is a popular code, which moved from having messages written on the sheets to the simplicity of the white sheet.

Inviting us to take a sharp look at the climate issue and how we care for and look at our common home and everything around us, the artist Rita RA proposes a change of the popular code to — THIS HOUSE IS NOT FOR SALE OR RENT — as a code of action and individual and collective consciousness.

Thus, it calls us to take part in the movement NOT FOR SALE — by pasting a recycled white sheet to the window and sharing photos in this common folder. 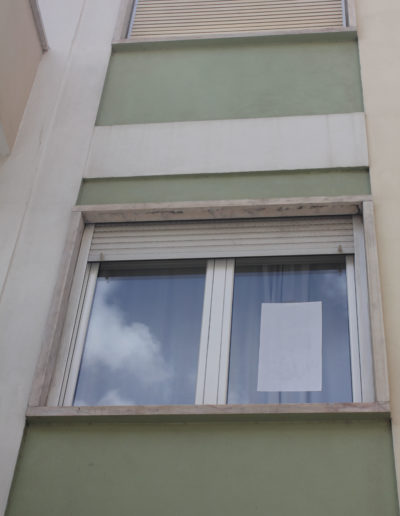 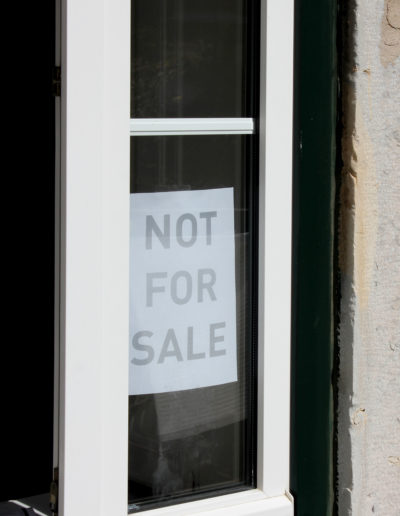 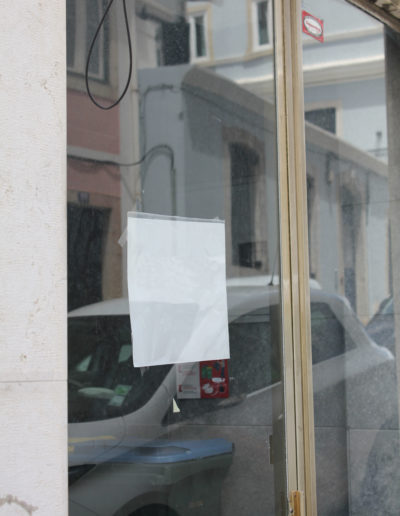 “With the Paris Agreement of 12 December 2015, the international community became aware of the urgency and need for a collective response to help build our common home. However, four years after that historic Agreement, we can see that the commitments made by States are still very “weak”, and are far from achieving the objectives set.

Along with so many initiatives, not only by governments but by civil society as a whole, it is necessary to ask whether there is a real political will to allocate greater human, financial and technological resources to mitigate the negative effects of climate change and to help the poorest and most vulnerable populations, who suffer the most.

With honesty, responsibility and courage we have to put our intelligence “at the service of another type of progress, one which is healthier, more human, more social, more integral” (Laudato Si’, 112), capable of placing economy at the service of the human person, building peace and protecting the environment. While the situation is not good and the planet is suffering, the window of opportunity is still open. We are still in time. Let us not let it close.

I would like these three key words — honesty, courage and responsibility — to be at the heart of your work today and tomorrow, which I follow, from here, with my best wishes and with my prayer.

Thank you very much.”

NOT FOR SALE is an artistic showcase by artist Rita RA, promoted by Fundação Fé e Cooperação, Associação Casa Velha and CIDSE, within the scope of the project Juntos pela Mudança II.